How I fell in love with Italy…

I remember my first trip to Italy vividly. It’s like my mind knew I needed to capture every moment so I could re-live that magical trip whenever I wanted. As this was my very first vacation overseas, I was terrified that I would not be able to find my way around. I was an inexperienced traveler with a brand new passport and my command of the Italian language ended after “Ciao” and Arrivederci”. Little did I know that after two weeks, this stranger would leave feeling like I’d met a wonderful new love.

The First Flirtations: Our eyes meet in the Eternal City

Bus hopping with a local

Rome is an amazing city, full of culture and beauty everywhere you look. However, it is also full of people and traffic. The Romans go about their day amidst a sea of tourists trying to navigate their way around this big, busy city.

On one of my first days there, I attempted to get from the Colosseum to Piazza Navona on the bus. After purchasing my ticket, I knew I needed to validate it but I had no idea how to do that. I was also not certain which bus of the many options would get me where I was going.

An Italian man noticed that I’d let several buses pass, still looking very confused. He offered to assist me, explaining that he was going in the same direction. At his instruction, I followed him on a bus as he pushed his way through the crowd. He validated his ticket and mine at a little box I would have never found in a corner on the other side of the bus. Then he told me he would show me where to get off as he was going a bit further than me. It was a small gesture of kindness but one that made a big difference in my day and in my spirits.

I began to think I might actually be able to find my way around this beautiful new country.

The Initial Sparks of Amore: Things heat up in rainy Florence

A rainy day and a whiskey neat

The beautiful Renaissance city of Florence was my next stop. The weather was cool and damp in Florence leaving me with a cold. I would not let that stop me. With my newfound knowledge of bus travel, I took one up to the famous viewpoint of Florence: Piazzale Michelangelo. I stood overlooking this beautiful, one-of-a-kind city, taking in that breathtaking view at sunset. It was well worth the trip.

As the bus was taking me back into the city center, I decided to take a risk and go one stop further than my directions advised, confident it would bring me closer to my hotel. After the bus pulled away from my planned stop, it quickly made its way out of the center of the bustling city and into the quieter suburbs. I realized that I would have to look for a hotel or a business so I could jump out and call a cab. That never happened. I had to wait until the bus had run the entire loop.

Finally back in the city,  I headed straight to the bar next to my hotel. My cold was getting the better of me so I just wanted a quick drink and a good night’s sleep. I walked up to the bar and asked the bartender for a whiskey neat. A good-looking Italian man standing next to me said “Excuse me but this is a bar. Not a tabacchi shop.”

Well, that pushed me right over the edge. I just wanted a drink, hold the attitude. So I responded, “Well that is good because I don’t need a tabacchi shop. I need a drink.” He looked surprised and explained saying, “I did not mean to offend, but when someone walks in with such purpose, they are usually buying a bus ticket, not a drink.” Realizing I had just met my Italian match, I laughed, and we continued chatting. He invited me to join him and his friends at a table in the front. We chatted and they gave me some insider tips on their city. After a challenging day, it was the perfect ending.

The Sparks Fly: A kind gesture from a stranger

The lady no longer sits in the corner

Next up was Venice! On my first evening, I made my way to Harry’s Bar to try the Bellini in its birthplace. I began chatting with two men seated next to me. They insisted I join them on their dinner reservation. As we settled in at our table, we began chatting with the couple beside us, who were celebrating their anniversary. I explained how this was a treat for me after dining alone so much. When my new friend learned I was heading to the five seaside towns of Cinque Terre, she gave me the name of a friend who owned a restaurant there that she recommended I try. I took down the information and thanked her.

After arriving in Cinque Terre, I settled into my hotel in the town of Monterosso. After being on a train most of the day, I was hungry, so I headed out to grab an early dinner nearby. I walked into a restaurant the hotel recommended. Despite being the only patron, the staff seated me at a table by the kitchen door. I asked to move to a table near a heat lamp as it was a chilly night. They adamantly refused. Feeling sad and confused, I walked out to find dinner somewhere else.

The next day, I needed to change my mood. I decided to check out the restaurant my new friend in Venice suggested. It was in the next town, Vernazza, on the main piazza with a view of the waterfront. I gave the friend’s name to the waiter who greeted me, and he returned with the owner, hurrying as the lunch hour was beginning. I held out my camera, showing her my photo of her friend. She grabbed it and looked at the image, beaming with delight.

She seated me at the best table in the house, with a view of the piazza and the waterfront. It seemed like hours passed as I sat enjoying a meal of linguine and clams, probably pulled from the Ligurian Sea that morning, along with a nice glass of local wine. I will never forget that meal, the view from the window, and most of all, the kindness shown to a stranger who very much needed the gesture.

I was feeling a bit like an Italian now...

The Relationship Begins: Realizing I was falling in love with Italy

The most memorable sunset

As my trip was winding down, a melancholy mood descended on me. I was not looking forward to leaving this place I had grown so fond of. On my last night in Cinque Terre, I decided to have a nightcap by the sea and watch the sunset. I chose a spot facing south with a view of the other four towns and settled in to enjoy the view.

The houses on the horizon seemed to cling desperately to the cliffs they were perched on for fear of falling into the sea. As I sat there, watching the sky slowly dim, I noticed the lights coming on in the houses. Slowly they lit up the string of towns with a peaceful twinkling effect like white lights on a Christmas tree.

As I watched this very unique show, I wondered what the residents were doing to wind down their day. Perhaps the nonnas were making a tasty Italian dinner for their grateful families. The kids might be kicking a ball around in the tiny village streets, vowing to one day be a famous football player. Maybe the fishermen were enjoying a drink with their mates and boasting about the day’s catch.

That was one of those magical moments you can never plan. They just happen. It’s impossible to convey the depth and range of emotion I was feeling but it is one I will never forget. Overwhelmed, I reflected on the journey that was coming to an end. I had experienced troubles along the way but had gotten myself through them. I’d seen so many beautiful things and met so many amazing people, people with stories of lives much different from mine in many ways, and very similar in others. I’d experienced new things and taken paths not possible in my daily life.

In that moment I realized this was not the end of a random trip, but the start of a wonderful new affair. I had fallen in love with a country that had spent the last two weeks loving me back.

Beautiful! Bellisima 🙂 what a lovely tribute. Italy is your great love.

Grazie a te! I do very much love Italy!!! 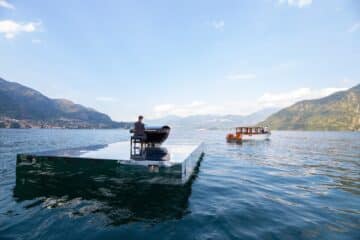