Tis Returns to Italy! Day 53: Too Far Off the Beaten Path?

I am at the point in my relationship with Italy that I have seen a lot of “off the beaten path” places. In my search for unique experiences, some go a little bit sideways.

For example, I took a day trip to Vipiteno, Italy on the northern border with Austria, after seeing a photo on Instagram of its incredibly charming Main Street that is presided over by a beautiful old clock tower. While the Main Street was charming, I spent a bizarre hour wandering the small town among lederhosen-clad men and listening to a band belt out Austrian folks songs. This can be very jarring when you think you are spending the day in an Austrian-influenced Italian town, not an Italian-influenced Austrian town.

Today I wondered if I might be on another ill-fated trip as I tried to find the Temple del Valadier, a beautiful chapel hidden in a cave. I had stumbled upon a photo of it and was intrigued by how unique it seemed. As I would pass near it on my drive south, I added it to my itinerary. It was in a bit of a remote area, as cave-based temples are, but I was up for the challenge.

When reaching a remote location, it is nice to have a top-notch navigation system. Unfortunately, the navigation system in my rental car, if you can call it that, left a lot to be desired. Since I am dropping the rental car in another city, as expected I got the worst car the Europcar office in Lucca had. My little FIAT Panda, while cute, did not have a navigation system, nor did its console display recognize my cell phone as my previous rental car had.

Therefore, I tried to make the best of a not-so-great situation, firing up google maps and propping my cell up on the dashboard. This, as you can probably imagine, was largely unsuccessful. My cellphone shouted directions to me from wherever it had most recently landed after falling from its unsteady perch on the console. However, as I got close to the Temple del Valadier, hidden in its cave in the mountains, the message was frequently, “GPS signal lost.”

To add to the fun challenges? The cellphone battery was dying and the car’s USB charger was not working.

Still, I persevered, hoping my surprisingly good internal compass, along with occasional input from google maps would get me there. At some point the GPS announced from its current location on the floorboard, almost proudly it seemed, “You have arrived.”

And arrive I had.

I only had to park the car in one of the many empty spaces just on the side of the road and walk up the steep path to my reward.

Slowly but steadily, I climbed to the cave that is the home of the temple. What a beautiful reward! It sits among absolutely breathtaking scenery, perched high and nestled inside its cave home. The temple is not old compared to much of Italian history, commissioned in 1828 by Pope Leo XII. However, its neighbor, the hermitage of Santa Maria just feet away, dates back to possibly 1029. This basic structure was built by Benedictine monks to house a burned image of the Madonna.

I spent some time admiring the peaceful beauty of this majestic temple and its bashful neighbor, in this remote and beautiful location. It seems fitting, that it is not easy to reach the space. One is made to pay the proper respects by negotiating the challenges in reaching the location.

As you look at both of the structures, you cannot help but compare the two. The temple is the dominant structure, taking up most of a visitor’s focus if they are not careful to pay the property attention to the hermitage next door. The little chapel seems to hide in the the shadows of its neighbor, as if a bit shy in its company. For me, it is perhaps the most beautiful of the two, made so by its simplicity in comparison to its imposing neighbor.

The successful traveler is richly rewarded. 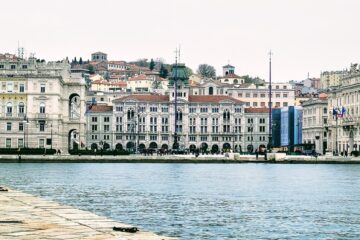